Our church has a children's ministry named "Wee Kirk". It's name means "Little Church" and, like so many things in our town, has a Scottish heritage to it. So I thought I would keep that in mind when I was asked to design a logo for the program. 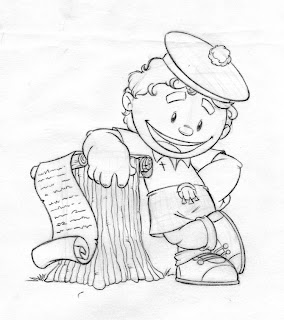 Here is the pencil drawing that everyone liked. It has our little guy leaning on a sculpture of a tree stump with a scroll that is a featured monument on the lawn of our church. 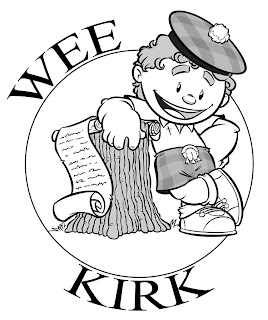 The next step was creating an ink line drawing that could be used on stationary, black and white signage and such. The inking was done digitally in Adobe Illustrator using the pen tool with the bezier curves. I could have inked this by hand with a sable brush and scanned it to the computer and then "tweeked" and "tweezed" it from there, but honestly there are days I just don't want to deal with all those steps and there is something to be said for doing it directly into the computer from the get go when that's where the piece is ultimatly heading. It's not necesarily easier or harder inking digitally. It involves a different mindset and it offers you a different set of options while demanding you adhere to the same artistic pricples that would apply to traditional inking. 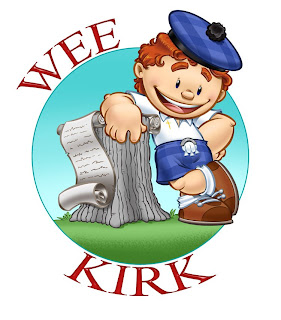 And here we have the final color of our guy. I took the paths that were created from the digital inking and brought them into Photoshop to use as the basis for the illustration. I mostly used the airbrush tool and standard brushes to get the final look.
I think he came out alright.
Posted by Carlo Lo Raso at 1:52 PM 5 comments: